It’s been a close count, but I can now share that I’ve been re-elected as the State MP for Melbourne for another 4 years!

Thank you to everyone who was a part of this campaign. It was a close race, but your hard work doorknocking, talking to voters on the phone, standing at train stations, and volunteering in other ways got us over the line. Thank you.

I’m also humbled by the support of the voters of Melbourne, who have put their faith in me for another 4 years. It’s heartening to see that so many people care deeply about protecting our environment, standing up for public housing and acting on climate change. These are the issues we will continue to work on in the next term of Parliament. 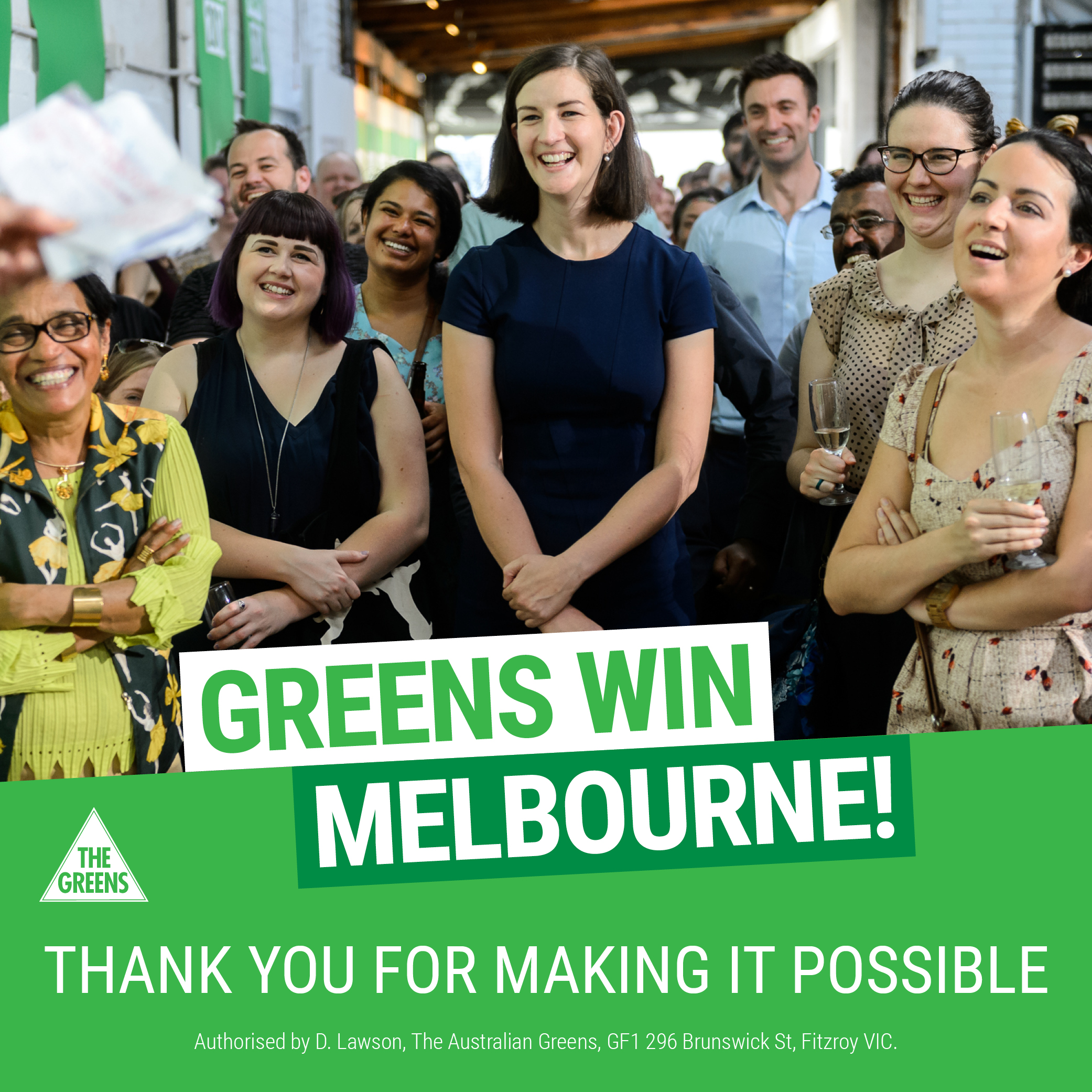 I also want to congratulate Daniel Andrews and his team. It’s wonderful to see Victoria comprehensively reject the Liberals’ racist, right-wing, law-and-order agenda, and vote in favour of progressive ideas.

Importantly, the powerful Greens campaigns across the state forced Labor to appeal to progressive voters in a way they never have before. Labor has adopted so many Greens policies over the last 4 years, from a renewable energy target and a ban on fracking, to dying with dignity laws and donations reforms. We’ve had a profound influence on our Parliament, our laws, and our state.

The Greens aren’t just here to get power for power’s sake. Winning Greens seats in Parliament is one way we can get action on the issues we care about - but we also do this by changing the narrative and forcing other parties to become more progressive. I’m proud that we’ve done both at this election.

I’m also excited to share that I won’t be the only Greens MP sitting in our Parliament!

Tim Read has won the seat of Brunswick for the Greens for the very first time, and Samantha Ratnam has been re-elected in Northern Metro. Prahran is still too close to call, but looking very promising.

It hasn’t all been good news, though. I’m sad to lose some of my wonderful Greens colleagues. The loss of Lidia Thorpe as Northcote’s MP and the first Aboriginal woman in Parliament is a particular blow to Victoria. We also weren’t able to get over the line in Richmond. It was always going to be hard to go up against the big money and dirty tactics of the Labor Party, and the overall swing to Labor was very large. But despite those challenges, I’m so proud we had positive swings to the Greens in both of these seats and we ran amazing, people-powered campaigns.

I’m also disappointed by Labor’s dodgy preference deals with parties like the Shooters and Fishers and the so-called ‘preference whisperer’ Glenn Druery. These deals mean we’re likely to lose Greens MPs in the upper house to micro-parties who won just a tiny percentage of the vote.

But no matter how many seats we have in Parliament, our job remains the same. We’ll hold the old parties to account and force them to act on the real issues that matter.

We’re in the midst of a climate emergency. We have just twelve years to shut down Victoria’s coal-fired power plants, which are Australia’s dirtiest. We have to stop the Labor Government’s sell off of public housing to private developers. And we must end native forest logging to save the Leadbeater’s Possum and Greater Glider from extinction.

We will continue the fight. But for now, let’s celebrate a wonderful victory here in Melbourne, and I hope to share more good news with you soon about other seats.

Thanks again to everyone who made this victory possible. We owe it to you.