Posted by Benjamin Maher 607tea on September 11, 2014
In light of the Labor’s announcement that they will rip up East West contracts if court action from Yarra and Moreland councils is successful, Greens are celebrating with community groups while remaining wary of Labor’s tricky new stance.
“Let's be clear, the reason Labor have backflipped  is because the Greens and the community have put pressure on them, especially in the inner city seats.
“We are glad Labor are now saying they may rip up the East West contracts, but there are tricky strings attached that Labor aren't talking about. Their position is conditional on winning a court case after the election. Why don't they just come out and say they'll rip up the contracts no matter what?
“They themselves have said there's no legal risk to doing so.
“This just goes to show we need Greens in Parliament after November to hold Labor to account on their promises and make sure this disastrous toll road doesn't go ahead" said Miss Sandell 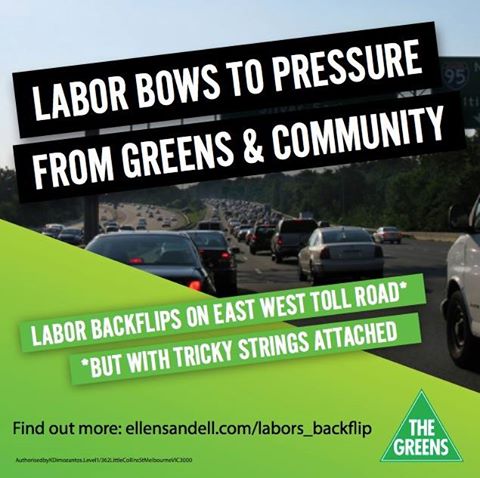