Greens to safeguard Victoria against inevitable failure of coal power

The Greens are warning Victoria will suffer devastating job losses and hits to the local economy if a plan to phase out the dirtiest power stations isn't put in place before they fail.
"The closure of old Victorian power stations is inevitable," said Australian Greens Leader Christine Milne. "With huge excess power supply and last century technology, they will become junk assets within the next five years, unable to compete with cheap, cleaner energy. "Victoria has a choice between a series of abrupt business failures that will cost jobs and rattle the economy, or a planned phase-out that will preserve jobs and the state's skills base," said Senator Milne.
To that end, the Greens are today launching a two-pronged federal and state push to phase out Victoria's dirty coal, while using funds from the Commonwealth's Building Stronger Regions Fund to deliver a jobs taskforce.

Senator Milne will lead the national campaign to prioritise the close down of the dirtiest coal power plants from each state, starting today with Victoria. At the state level, the Greens will use their position in the new Victorian parliament to require amendments to the Electricity Industry Act 2000 (VIC) and to force the Minister to withdraw their generation licences.

"Billions of dollars in investment and thousands of jobs are at risk if Victoria remains tied up in old, dirty technology," said Victorian Greens Leader Greg Barber MLC. "The Greens' plan will help Victoria smoothly transition away from coal fired power without causing job losses, while setting up communities for the industries of the future.

"The plan should be a priority for Victoria and the Greens will be using our position in the new state parliament to push for it," said Mr Barber. "Our coal power is the dirtiest in the world and our investment in renewables is the lowest in the country," said Greens candidate for Melbourne, Ellen Sandell.

"There is a huge number of long-term local jobs to be had in rehabilitation and decommissioning of power plants," said Senator Milne. "The move away from coal can either be a chaotic, dislocating process, or a planned phase out. The Greens want energy security and will lead an orderly transition to new jobs and investment in solar and wind," Senator Milne concluded.

The Victorian Coal Closure policy initiative explains how excess energy capacity in each Australian state can be removed without affecting the reliability of electricity, and identifies Victoria as a national priority in the transition to a renewable energy powered future. 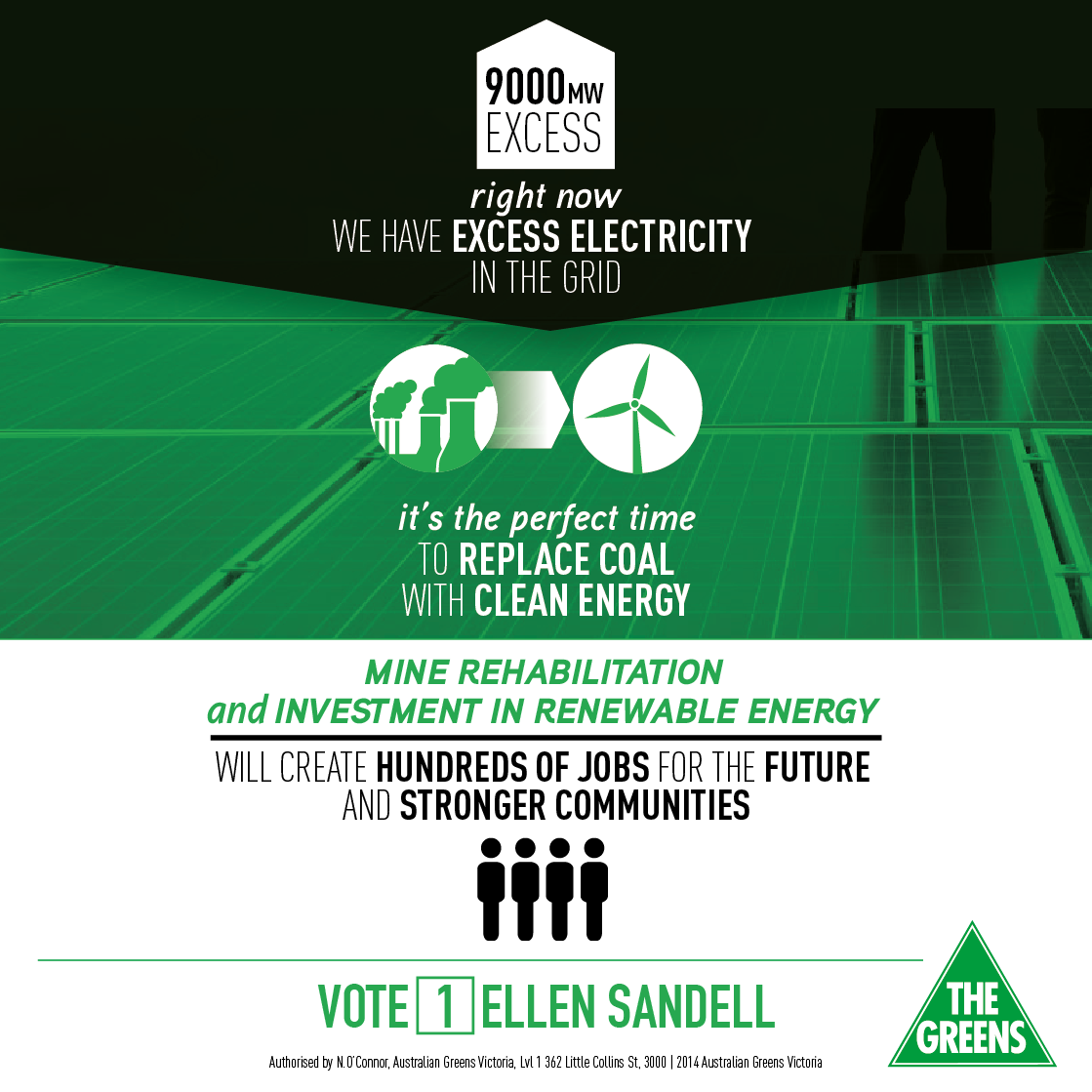